‘At the moment I am at the top of a hill at the front in Aragon. A complete circle of rocky mountains, covered with green scrub, very barren with a few fields in between. Two kilometres away a village held by the enemy. A grey stone affair with a big church. The enemy are entirely invisible. An occasional rifleshot. One burst of machine-gun fire. One or two aeroplanes. Otherwise nothing. The sound of our guns sometimes a long way off. And nothing else but a sun so hot that I am almost ill, can eat very little and scarcely work at all. Nothing at all to do. We lie around all day. At night two hours on the watch – last night very fine with the lightning flickering behind Saragossa., miles away. Sleeping in the open with a single blanket on the stones. How long we are to be up here I don’t know…. Enlisted on the basis of my Party card. There was one little Italian comrade with some broken English. Now he’s been sent off. So I’m here and the only communication I have is with the broken French of a young Catalan volunteer. So I am not only lonely but feel a bit useless….. I am wearing a pair of heavy black corduroy trousers (expropriated from the bourgeoisie), a blue sports shirt and that alpaca coat, rope-soled sandals and an infinitely battered old sombrero. ……… Just now for instance, I have unlimited opportunity to write. And I have plenty of things I want to write But I can’t get it together in my head, things aren’t straight enough: all I can put down are my immediate subjective impressions, and I can’t think about Birmingham or anywhere else. Oh for the objectivity of Nehru. I’ll learn: I am learning. But it’s going to be something of a testing time… ‘ John Cornford 1936 The bus stops by a rubbish dump, the track upwards is too narrow, we have to take a minbus or walk. ‘You, Jane, will go in the minibus.’ I really want to walk but they are probably right. It is a hot day and I have to read at the top. It will not help to arrive sweating, breathless and flustered. The Estrecho Quinto trenches, five Roman miles from Huesca, just outside Tierz, three of the same miles out, are on a limestone escarpment. Modern miles are longer: from the top we look down on the last mile to Huesca. On another hill, between us and the long mountain wall of the Pyrenees we can see the castle of Monte Aragon. A straight sided U shaped valley cuts into the line of mountains that stretches along the horizon. In the last Ice Age there was a glacier there. The past, a glacier… The imagery of John Cornford’s two most famous poems is not of a metaphorical imagined landscape but a tight, literal description of what he could see on sentry duty. What John wanted to write -what he thought he ought to write- on this baking hill-top,seems to have been something about Birmingham, of all places. Probably he was thinking of something historical about Joseph Chamberlain who he was hoping to research, or perhaps something polemical about the Watch Committee, or the bans and proscriptions against Communists in the TUC at that time. He had been arrested in Birmingham in April or May 1936 for distributing Trades- Council leaflets outside a light engineering works. It was a planned thing with National Council for Civil Liberties observers. The Trades Council had not been sure they wanted Communist help in their campaign – delegates had to sign a form every month confirming that they were not members of the Communist Party or any other proscribed organisation. But it still seems odd, to think of him up here, so hot, so bored, so lonely, and trying to write about Brum. He did not manage to, luckily for the editors of poetry anthologies everywhere. Instead we have those two extraordinary poems, written in pencil. (Letter from Aragon the only one of his poems from Spain that was published in John’s life-time, was written a little later when he was in hospital.)

I read aloud on the high ridge of stone, against the background he describes so clearly Heart of the heartless world, dear heart, The thought of you Is the pain at my side, The shadow that stills my view… … Then I read Full Moon at Tierz: Before the storming of Huesca It seems to me to be a useful poem for us, as we investigate the history of the International Brigades and of the Aragon Front. I know the poem well, I have thought about what each word means, why it is there, which sections are quotes from songs. I try to convey that, hoping I don’t sound like a History teacher or the celebrant at a funeral. In a way, though, that is what I am.

Any one of the group could have done it, but I was asked because I am the daughter of the woman for whom they were written, the woman who , I suppose – I never asked her- made sure they were published, my mother, Margot Heinemann.

I finish up with  her poem Ringstead Mill. (The full text appears on the first page of this blog) Poison fires we never dreamed of Ring the untended field, Change is their memorial Who have changed the world. It is emotional. I knew it would be, intended it to be, for me and for the group. What is the point of coming all this way if not to think of the people we celebrate. And since they died, and often died so young there is cause for grief. Other sorrows surface too. I am thinking about many dead people, my father, friends who have died, and most of all my mother. I sense their presence comforting, supportive. ”You did OK.”

Heart of the Heartless World in particular is often read at secular funerals that have nothing to do with war. Sociologists, who have a theory for everything, say that we die two deaths. Biological death is what most of us think of as death, heart stopped, movement and breathing ceased. Social death only occurs when the last person who remembers us alive has themselves died biologically. We live socially a generation or two after our biological death. It is an interesting idea, one that I found very peculiar when first I heard it. Now I find it a useful way of thinking. On our coach trip we have thirty one biologically living people and perhaps an equal number, or perhaps more, who are socially alive to us though we cannot see or touch them. Some of them are closely connected to the Spanish Civil War, others are not. They brought some of us here. The poem that is so specific to this landscape makes sense to those who mourn other losses.

Victor speaks. I remember thinking that what he says is valuable and interesting, with good evidence, but I must have been so keyed up with the moment, and so relieved to have got through it creditably, that I cannot remember all the details. He describes a series of bloody battles for strategic points along the front and the attempts to take Huesca. He says that the Republicans did not shoot or bomb many people in Huesca. He pauses- but, he reminds us, they cut off the water supply. People had to drink dirty water, and died of disease. I wonder how on earth John Cornford can have thought this was a quiet front. Victor explains that Cornford, and Orwell too, passed through for a few weeks each at a time when there was little fighting. Once more he pauses. This, he says quietly, was not typical.

We are gathered in a rough semi-circle where the ridge has widened into a plateau, standing with our flags for the photographs. There are several Republican flags and a POUM flag but no Communist one. Fair enough, I think, this was a POUM militia. Manus O Riordan and John invite me to stand by the Connolly column flag, and on the basis that my father, who really has nothing to do with any of this, was Irish, I am pleased to do so. I have John’s photograph with me, the one where he looks uncharacteristically like a matinee idol so I hold it up. The photograph Margot preferred shows him grinning, a smile, she said that lit up his face at the most serious moments. His hair is not only long but uncombed and could do with a wash. Alive, he was no poster boy, no matinee idol, “That handsome head charmed no acquiescence, He convinced and led.” He would not have described himself as a poet either, but as a historian, a revolutionary and, whether we like it or not, as a Communist. 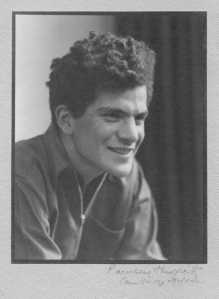 Manus strikes up with the Internationale and we all join in, though the Americans know different words. Then I start Bandiera Rossa and again everybody sings. We walk down a narrow path to the trenches. On one side is a dug-out room, I creep in, try to look round with the light from my mobile phone but there really isn’t time to play. We pause by a memorial to John Cornford himself. It is damaged.  I am nor sure if it was vandalised, like some of the other boards we have seen on this trip, or damaged by a falling stone. Water has seeped under the broken plastic making strangely beautiful sepia and purple patterns of the writing. His photograph is still clear in the bottom right-hand corner. I put my few wilted sprigs of wild flowers there. Victor embraces me. He and I pose for a photograph. It feels right. 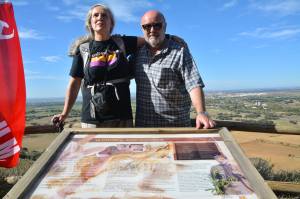 Marshall Mateer filmed the whole tour. https://www.flickr.com/photos/ibmt/16480436801/ . Here you can see exerpts from my reading. If you want the whole poem you need to look it up.

Excerpts from John Cornford’s own writings come from Understand the Weapon, Understand the Wound: selected writings of John Cornford and are also in John Cornford :Collected Writings. Both are edited by Jonathan Galassi and published by Carcanet http://www.carcanet.co.uk/cgi-bin/indexer   both, sadly are out of print. John’s nephew Adam Cornford & Sandra Mendez Rosenbaum are working with Galassi and Carcanet to raise the money, through crowdfunding,for John’s writings to be reprinted.